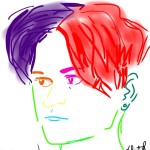 when i started in the history program @ cuny i was super lucky to be a durst research scholar at the new media lab where i worked on virtual new york ( http://www.vny.cuny.edu/ ) digitizing the collections of eccentric real estate developer seymour durst. it was there that i first learned the digital basics (html + css!) and got bitten by the open source bug. after that i worked as an instructional technology fellow (helping profs integrate technology into the classroom), a position from which i was summarily dismissed when i insisted on using drupal instead of wordpress for a class site. good news + bad news is the the school i work for now gives me enough rope to hang myself (some days i dangle quite a bit)-the systems guy gave me my own drupal server to shut me up, and i'm responsible for install, security, upkeep, site architecture + design; have been mostly thrilled by recent distributions such as drupal commons + open publish (would love to have the skills to build a moodle-like drupal lms). am currently writing my dissertation proposal and am embarrassed (really embarrassed) to say that i've been spending much of my time making wordle maps of congressional hearings + a variety of state & local bills-i am writing about what happened to radical feminist ideas about rape when they were absorbed by the mainstream press/politicians, and would love to be able to use a more precise tool than wordle (i know, it won't be hard) to do some text analysis. even word clouds have been super helpful-supreme court decisions that are supposedly about keeping "predators" (not a feminist term) off the street end up with words like *states* *power* *congress* huge and in the forefront and *sexually*, *dissenting*, *responsibility* flanking them in tiny print.